I’m no longer going to title myself with Mrs. or Miss or Ms. I’m not even going to impose myself on my brothers at arms standing tall in the Mister world. I’m claiming Mx. I’m setting my feet firmly on the label.

It’s the most commonly used gender neutral moniker used; where the x represents a wildcard. It’s the key to a freedom that I’ve desired since thinking about my gender in the sixth grade and feeling like I needed to be a boy, but not understanding the rejection I felt from the one person I trusted to tell at that age.

I’m not a man caught in a woman’s body. I thought of that for quite a while as well. I have several people that I love dearly who are transitioning between the worlds. It awakened a questioning that I didn’t even realize was there. It made me consider whether I was just a human without gender or am I something that I’ve dreamed about? Am I a Dude? (In the Big Lebowski way, YES I am, because this Dude Abides!) Would I feel more like me or less like me if I were to present as a more neutral gender or more masculine? What would my husband think? Despite those very difficult questions and hours more, I realized I’m a woman that rarely thinks of being one or anything really. I’m human and that’s good enough for me.

I had just had the conversation with my husband about me wanting to use Mr. instead of Mrs. or Ms. or Miss. I explained that I’d seen a Twitter meme where it pointed out that where a man’s title doesn’t change, the woman’s titles are only pointing to how they are related to the closes man in her life. I didn’t like the taste of that bitterness in my conscience which is where the entire thought process began.

May I give a special acknowledgement to Terran Gray who’s gentle support while I struggled to decide where I stand roiled around inside me. They never once made me feel as if I were weird or out of place any more than usual ( 🙂 ) Their kindness and compassion even when I was asking some pretty deep questions were nothing short of a blessed boone. I wish them nothing but the very best in any endeavor they choose. Someone that beautiful in this world is a rarity and I am grateful.

This is where I am in my life. No excuses. No guts. All the glory!

All The Bumpy Bits 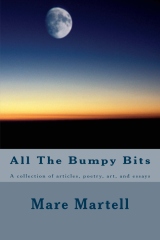 A collection of articles, poetry, art, and essays

A complete (through 2014) compilation of articles, poems, essays, and art by Mare Martell. Racism, Feminism, Love, Love thy neighbor, honor, truth, lies, and other miscellanea cascade a life learning curve of one woman author.

A self professed lover of life and happiness, this book drives through some dark corners with the high beams of activism running full bore through sexual assault, domestic violence, love, loss, and personal growth.