When I was little, I was made to be small.

My voice was taken, shaken, and broken.

I was told murderous lies

locked me away floating

in the dark corner

that bled my windowsill orange

while he crushed breath from my lungs

with the sour smell of stale beer,

I was confused why they screamed

but I was forced to not make a sound

no matter how much it hurt

no matter if I couldn’t feel my body

no matter if I got lost in the night.

I prayed, one day,

that I’d be small enough,

A short bit ago, I realized that I’d get unusually irritable or uncontrollably weepy around seven o’clock every night. My friend suggested that maybe I was running out of something, like my medication wore off, or my hormones were going haywire like clockwork. That suggestion held merit so I paid closer attention to what I was doing during the day.

It dawned on me that I was halting social media around that time each day to tend to dinner, my pups, and other things that are required for the night time maintenance of my home (closing the blinds, putting down the windows, turning on lights, etc.) But why was I feeling so much intense emotion because of setting down social media?

I’ve been diagnosed with non-combative PTSD resulting from more life events than I feel comfortable expressing in a written vomit, but suffice it to say, I’ve done my fair share of my sentence in a therapist’s office trying to sort through the violence I’ve experienced. In fact, in a way, I was brought up by therapists which is probably why I need to talk out loud to process current events, or in this case to figure out how to deal with the blasts of dangerous triggering that occurs all/every day lately.

It started with Brock Turner’s smug rapist face parading through my feed as if he were proud of his crime. That sent me into extreme rage where I relived things that happened in my own life. It kept me on edge, disrupted my sleep, caused unusual fears, and sequestered me to my home more than once because I feel safe here.

But then the “Pussygate” issue came into play, The Presidential nominee for the Republican party spewing vile nastiness from that anus of a pie-hole has made it very difficult for me to deal with things. It’s not the word that he used or even that he described in detail what he’s done. It’s that he’s still being seen as a leader.

He’s being defended because his actions and words are just “locker room” talk or “boys being boys.” This is where it starts to dig deeper into my scar tissue and wiggle around a bit to rip open some of the dark times that I have put to rest already. But his admission without reprimand disgusts my sense and need for justice. This is NOT okay.

Everything I’ve gone through in my life. Everything I fight against now regarding domestic abuse, rape, sexual assault, and violence is for naught. I’ve seen people posting such garbage in response to my objections that it feels as if I’m facing that nastiness in AZ where I was told that my rapist would go free because “You didn’t verbally say no.” But I did say “Get the fuck off me.” “STOP!” “I don’t know you.” That mattered not. It’s just words. It’s just another liar. Her words against his. They deferred to him.

It’s been difficult to even get out of bed most days. My people live far away from me. The only way I can be a part of their lives on a daily basis is through social media. It’s my window to a place where I felt happy, healthy, safe, and loved. But even that is being taken away as more and more stories come to light. It no longer seems safe to attend my newsfeeds for fear or tripping over another bullshit pile from Trump.

What I don’t understand is why he’s automatically assumed to be telling the truth despite the video, verbal, and written words that have him specifically saying he does these things. Why aren’t more people upset? Why are they looking to him as their personal messiah? Why are they believing him even when he denies the very words he just uttered? Why are the women that came forward get disregarded as Democratic plants, liars, or even a vindictive ex, but he is innocent?

If one person comes forward, it’s possible they may not be entirely truthful, but if 6+ come forward, there’s a pretty good chance they’re telling the truth even without him verbally saying he did kiss women without permission or grab them by “the pussy.”

When I say, “This is the perfect example of how rape culture works.” I’ve been rebuked by some or discounted because Miley Cyrus lets people touch her while she’s performing. Worse is the woman that said she doesn’t see it (the rape culture). But she was quick to dismiss me because, after all, I’m a Libtard, right? I don’t matter. My words don’t matter. My very being as a survivor doesn’t matter to them. I felt shame for them.

Someone else asked, “Well why didn’t they report it when it happened? Had to have time to make up a good story?”

WTF? Seriously? First, I’m glad you have no idea what it’s like to experience the theft of your personal control by pawing hands or smelly breath covering your face. I’m delighted you don’t know what it feels like to feel powerless under someone else. Oh, well maybe you do and thought it was normal. It isn’t.

Your body is YOURS. Nobody else has a right to touch it without consent. It’s not theirs. It’s yours. But to excuse it as a fabrication because it may change your views is not only disturbing but disgusting. Why would anyone, considering the way these women have been treated since the story broke, come forward if it weren’t true? It’s a far more courageous act to stand up to someone whom violates my personal space and safety with lewd and irresponsible acts against me than it would be to allow that person to harm someone else.

Despite all of the negative rhetoric towards women** just like me, women who have survived being sexually assaulted in the many layers of legalese, I feel more resolve towards educating the ignorant. I feel that if my voice is loud enough, maybe I can help someone else not feel the ostrasization, shame, or guilt that commonly follows an assault. I can’t in good conscience give up the mantle that was forced on me from nearly day one. I will, however, tell every woman or man that shares their story:

You are NOT alone

It wasn’t your fault

It’s the very least I can do considering they’re also seeing what happens when a victim/survivor comes forward with their story.

**Yes, I know that men are raped. I know that they are sexually assaulted. I am in no way discounting their trauma, but I am speaking as a woman with intimate knowledge, not as a male. 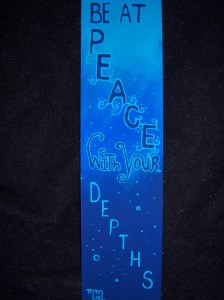 Be at PEACE with your DEPTHS
Acrylic on Board
(Guess-timated) 8″X22″ FOR SALE!

I was asked to explain “Be at peace with your depths.” My interpretation of it may differ from how you take it, but I explained it as this:
“Your depths are your darkest parts. They’re there under all the fluff and brightness. If you’re at peace with them, it doesn’t matter if they bubble to the surface because you can flow through them.”
I received an enthusiastic response followed by: “They are abubbling and I be a troublin over them. I do understand that I must contend with the dark and negitive BUT me no like it one bit.”
“Nobody LIKES negative thoughts, but if you deny them, then you deny a part of who you are. It’s okay to have them. It’s okay to feel them. It’s not okay to dwell there. I’ve suffered from PTSD. I understand the anger, the frustrations, the mood swings. To maintain what I have right now, I use a lot of meditation, breathing, grounding, shielding, and visual aids to relieve the symptoms.”
Feel free to share your interpretations of this in the comments. Be Love

It felt good to be remembered kindly for a day

No words of hate shouted, no reminders to my face

The forgiveness of sacrifice, seen in a different way.

I wanted to go like my brothers before me

I wanted to serve with my life, if necessary.

I wanted to accept their mantle, to be their shining star.

But all I could say when I returned from that place

Was, “No more. I feel like such a disaster, such a disgrace.”

I lived in terror that tore me apart, shredded me inside out.

I couldn’t look in the mirror without hating my every doubt.

I couldn’t reach out for help, because who would understand?

That I didn’t even feel real, that I wasn’t even a man.

I was a soldier without a war.

I was lost in my inner storm.

Although I lost my life, not on the battle-field

My family still stood and by my graveside kneeled.

It felt good to be remembered kindly, if even for a day.

From her lips, anguish spewed

Hurricanes of self pity storms

Anchors of the loveless mourned

Eden justified with words then spoken

Taking up arms, to mend the broken.

the yet sung dirge