The Swiss have more than cheese and chocolate?

Learn more about this CSA at Herb and Plow Blog

As I looked through the ground candy overflowing with abundant goodies (minus the cilantro which tastes like dish soap to me which I’ve been told indicates an allergy to it), I discovered Swiss Chard among the bounty. I’m normally a veggie person, believe it or not, but I’d never had reason or cause to select Swiss chard as a vegetable option. Truthfully, I thought, “The Swiss have something besides chocolate and cheese?” Okay, color me ignorant about that, but I had no idea how to cook it, or is it one that is eaten cold? Off to Google I went!

Miss Chris, our farmer delivery woman, suggested a bed of olive oil sauteed onion strips and minced garlic to which the chard is added and cooked only until it just wilts. The stems can be put in with the onions and garlic as the start of the saute’. Wanting to add another option, I discovered a similar recipe on THIS SITE. Make sure to read the reviews for more tips, ideas, and recipe additions. 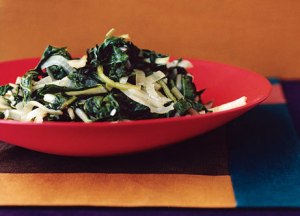 Recipe and Photo from Epicurious.com

· Chard can be washed, dried, and cut 2 days ahead and chilled in sealed bags lined with dampened paper towels.
· Chard can be cooked 4 hours ahead and reheated over low heat on stove or in a microwave oven.

One comment on “Herb and Plow CSA: Week Three”

Traditional Welsh Witchcraft in the Hills of East Tennessee

diameblog
O at the Edges

Musings on poetry, language, perception, numbers, food, and anything else that slips through the cracks.