I keep a pocket full of happiness with me almost always. It contains: two rubber ducks (one yellow with the word Believe on its chest, the other silver), a squishy rubber pig, an alpaca, a scarab beetle, a small handmade book, and a full sized harmonica. 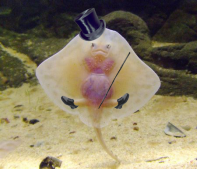 I use it to bring smiles to children and adults alike. I change it up sometimes so there are different things, but those are typically the staple items. If you want to see someone smile really big, pull something they’d never expect from your own pocket. Fussy kids? No problem, pull out a rubber pig. Cranky adults? No sweat, a rubber duck usually does the trick. Giving them an unexpected surprise from a stranger’s pocket (that isn’t disgusting or ethically challenging) brings joy which is kind of a trademark of mine.

It’s the Monday after payday and our finances have hit as close to nada as they’ve ever been. The ban on overtime (even the measly four hours my husband would get a week) really hurt. Our groceries came out of that overtime and boy are we feeling it.

I felt a tremendous amount of stress when I went to Pet Supplies to get food for the cats and dogs. The bags of food glared hatefully at me, “You don’t have enough money to feed them and you too.” The prices exclaimed disdainfully. I started to cry. I broke down in the middle of the aisle while my frequent companion, six year old (nearly seven) neighbor Nicholas, was off looking at fish, and a guinea pig he insists is a hamster, and scorpions. I just flat out couldn’t keep my cool.

“How can I afford to feed my cats and dogs and my family.” I bemoaned. Despair washed over me as I tried to do math in my overloaded brain. My little dog Piggy needs to have grain free food. She doesn’t do well if there is grains so tack on another 5 bucks just for not having filler. yay.

One of the young women that worked there disappeared as soon as the tears started. I felt really alone. I picked up a 5 pound bag of food for 12 bucks. I went to the cat food and picked up a 20 pound bag for the same price. Here came the young woman who gave me a five pound bag at just over 10 with no grains in the ingredients. She said she was sorry she couldn’t do more.

When I got into the car, Nicholas said, “Are you in a bad mood today, Mare?”

“No, Nicholas. My heart is just sad because I don’t have many dollars.”

“You know what you need, Mare?” He asked while waving out the window absently.

“No, what do I need.” I asked, impatiently waiting for the light to change. I wanted to be home sulking.

“A pocket full of happiness that has $100 dollars in it.” He said just as matter of factly as if he were telling me the weather.

“Indeed, that would be a happy pocket.” I chuckled. Oh, the wisdom of children. Then I remembered, I get to work for some dollars this weekend as a dishwasher. I’ll have enough. I forgot all about it until he reminded me with happiness.

I promised him a Dunkin Donuts (our favorite) when I have dollars again. He was pleased he made me laugh. I was pleased he prodded me to remember to look forward in hope.

A Pocket Full of Happiness!

Thank you to whomever left the pocket full of happiness tacked to my door with a nose magnet. The gratitude I feel for this is just magnified. I will obey the command that Nicholas get his doughnuts. Thank you.

I asked Nicholas as he walked up the hill to his home after getting off the school bus, “Guess what I got on my door today?!’

Nicholas was so overjoyed to declare it before I even said anything, he said, “A pocket full of happiness with dollars in it so I get Dunkin Donuts!”

I laughed. “How did you know?”

“I just knew it!” He grinned while swinging his Spiderman (his favorite super hero) backpack from shoulder to shoulder. Man, I sure do love that little kid.

We went to Dunkin Donuts as the instructions commanded. Nicholas had a raspberry cheesecake doughnut, an Oreo cookie cheesecake doughnut, a milk, AND a cinnamon munchkin. I got a small coffee and a chocolate coconut doughnut. I mooed every time Nicholas lifted his milk up over the bag we place in the middle of the table. He laughs hysterically every time. Then he started doing “The Itsy Bitsy Spider” on my arms and hair so I screamed playfully.

“YOU SCARED ME!” He said as he dropped his raspberry doughnut splatted on the floor while he farted. While we both bellowed peppery laughter, he declared, “Excuse me!” We laughed even harder than the cows. It really was a pocket full of happiness. Truly, thank you with all sincerity.

Journey of an East Tennessee Christo-Pagan